Radio Frequencies: 7 Most Asked Questions for the CWNA 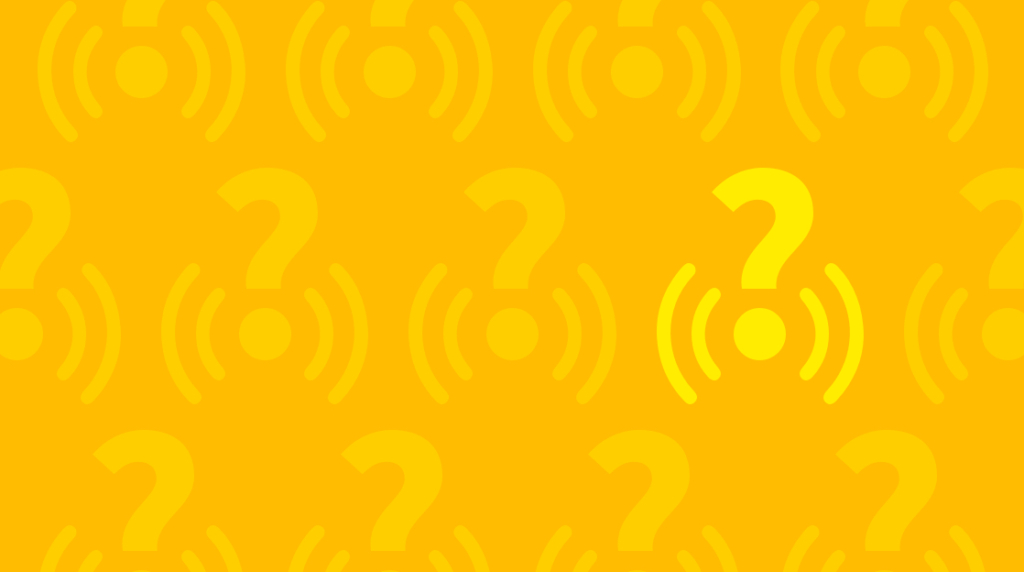 Try and imagine a world without radio. Maybe you shrug and think, “Well, I use Spotify, so I don’t really need radio.” But commercial radio is only one and increasingly tiny use of radio. A world without radio is a world without cell phones, Wi-Fi, microwaves, wide area networks, bluetooth and pretty much everything else that places us in the modern world. Oh, and we wouldn’t be able to see anything either.

The terminology, science and math behind radio frequency, sometimes called RF Theory, can be daunting, but we want it to make sense. We made a list of the most common questions and misunderstandings of radio frequency and brought it together here for you. Maybe you’re studying for a certification exam about RF theory. Or maybe you’re just trying to understand why, exactly, your Wi-Fi router uses so many different numbers and letters to explain what devices it can handle. Either way, read on for our intro crash course to RF theory.

What are Radio Frequencies?

Imagine dropping a pebble in a still pond; the wave ripples outward. Now imagine that same wave effect in three dimensions. That’s essentially what electromagnetic waves are doing. electromagnetic waves (EM waves) move energy through space in the form of a wave (or a waveform. An EM wave has a top and a bottom. As it travels it moves upward, moves downward, and then goes back up to its top.

EM waves are measured according to how often they repeat their up and down motion. That’s why it’s termed frequency. The word to describe how often a wave makes it back to the top of its pattern is oscillation, which is measured per second. One hertz (abbreviated Hz) is one wave per second.

That might sound overly technical, but it’s about as simple an explanation as you can get for how electromagnetic waves and radio frequencies work. The thing to remember is the difference between a gamma ray shooting through space, visible light bouncing on our eyeballs, and radio waves carrying Wi-Fi data to our phones is simply how much energy is in them — and that makes their frequencies change. If you measured all the possible electromagnetic waves according to how fast they go up and down, radio waves are way low on the list.

Radio frequencies range from 300GHz at the high-powered end to 3kHz on the low end. Now, they might be weak relative to other EM waves, but we use them all the time. They’re very common and they’re used in mobile phones, computers, and televisions as well as in many forms of broadcasting and communication.

What are the Physical Attributes of Wireless Communication?

It’s well and good to understand what an electromagnetic wave is and where radio frequencies fall in that, but something doesn’t just become a radio wave. It has to get there somehow. To grasp that, an understanding of the physical, non-wireless components can help.

There are many different methods for converting signals and for forming a pathway, but no communication can be converted into a radio wave and used to communicate without these three physical components.

What are Decibel, mW, and Decibel-milliwatts?

You might be surprised (and dismayed) to learn that math is important in wireless communication. Let’s revisit the idea an EM wave is like a dropped pebble. The waves that ripple out from a small pebble dropped in the center of a lake won’t reach the shore. To get your wave to reach the shore, you’d either need a bigger pebble, or a complicated arrangement of pebbles that drop along the way to the shore, re-forming the ripples when they get weak. A similar thing happens with EM waves: they weaken over distance and time. Predicting and doing something about that loss requires math.

The basic unit of power is a watt, which measures the rate of energy transfer in a circuit. Our RF math will measure power in milliwatts (mW).

A decibel is a unit of comparison that measures the difference between two power levels.

That’s important because if a signal lost power while it was in transit, we’d want to quantify the change in power. For example, we could measure the rate at which we lose power. We might measure that we lose 100db of power for every 1000 feet of cable. RF math depends on decibel-milliwatts (dBm) per 1mW to measure loss.

Explaining more than the abstract idea of RF math is a cottage industry unto itself. But one of the most important rules in RF math is the rule of 10s and 3s to calculate the relationship between mW and dBm loss. The rule is:

How Do You Measure Signals?

Equivalent Isotropic Radiated Power, or EIRP, indicates the strength of the signal from its radiation point. In other words, it’s the amount of signal leaving the antenna. EIRP tends to be expressed as dBi (power density with respect to an isotropic antenna) or dBd (power density with respect to a dipole antenna). The formula for measuring EIRP is [Transmit Power] – [Cable Loss] + [Antenna Gain].

Received Signal Strength Indicator, or RSSI, determines the total energy of a signal on the receiving end. RSSI is measured in decibels from 0 to -120. The closer to 0, the stronger the signal. The actual RSSI + the antenna gain will equal the Displayed RSSI.

For example, if a client card is a 2dbi antenna, and the actual RSSI is being seen as -55dBm, we plug those numbers into the formula to find our displayed RSSI. -55dBm + 2dbm = -53dBm.

How Do You Identify Noise?

Noise is any unwanted radio frequency energy being transmitted or received along with the desired signal. Noise exists in all RF systems to some degree, but how much and how strong it is can affect the system’s quality and performance.

Noise is usually categorized by how it’s generated:

What are Wireless Bands and Channels?

Bands and channels can be difficult to understand conceptually, but they’re important for understanding wireless communications. First, it’s important to remember that a frequency is a physical thing. It’s the precise rate of up-and-down motion of the wave. Bands and channels, however, are human inventions to help explain how we use that behavior.

A band is actually a range of frequencies. Technological limitations mean that when different devices tune to the same frequency, they might be off a little bit. The band is a predefined range of frequencies that are considered grouped together. For instance, the band of EM energy we recognize as visible light typically exists between 380 and 700 nanometers. In other words, the light band is 380-700nm, but where red ends and orange starts needs a further subdivision.

A channel is, in essence, a specified, repeating subdivision of a band. When a band is channelized, it means the divisions between each broadcast frequency has a specific size. Citizen Band or CB radio, for instance, has 10KHz channels.

There are multiple bands in the radio spectrum that are used for Wi-Fi. Within these bands are many channels. A group called IEEE is responsible for laying out the definitions of how these frequencies, bands and channels are best implemented. IEEE defined many bands and frequencies, and the set of regulations that apply to wireless communications are designated “802.11”.

802.11 specifies that wireless needs about 20 megahertz in channel width to operate. This can lead to odd technical challenges, since channels are spaced 5MHz apart and there can be overlap and interference from the adjacent channels. For this reason, you will find that equipment is typically deployed on channels 1, 6, and 11, since they’re the only channels that have no overlap.

The 5GHz band's channels are 20MHz wide, but do not overlap. The 5GHz band is further divided into UNII-1, UNII-2, UNII2e and UNII-3 "Unlicensed National Information Infrastructure" bands. It's worth noting that 5GHz has a shorter range, because it has a higher frequency than 2.4GHz band.

To put it concisely, 2.4GHz can travel longer distances but transmits at a slower speed. It is used in cordless phones, microwaves, Bluetooth, and wireless cameras. The 5GHz band provides faster data transfer rates, and is less crowded, with more channels, but it has a shorter range.

What are the Differences in the 802.11 Standards?

Like so much else in RF, exactly what the 802.11 standards are can be confusing. Like we mentioned, 802.11 refers to the regulations and standards for LANS and WANS. But technology keeps evolving, so the 802.11 standard does too. As capabilities have been added, the standards that unify them have been recognized as amendments to the standard. But at some point, it was realized that all the letters didn’t make sense to the broad public, so they also added a simple numbering convention so people could recognize them a bit better.

802.11ad, compared to its predecessors, came to the table with something new. While the previous versions used either 2.4GHz or a 5GHz frequency, the 802.11ad used a new frequency: 60GHz.

802.11ah. Wireless range has to take into consideration distance as well as physical obstructions. The 802.11ah, operating in the 900MHz range can penetrate walls and other surfaces more easily, and with less power but at the sacrifice of speed.

802.11ax or Wi-Fi 6 is the most recent and most exciting wireless standard and it packs in improvements:

Why You Should Learn RF Theory

Whether you’re studying radio theory to better understand your wireless network’s functionality, pass a certifying exam, or just make sense of RF, hopefully this collection of RF theory concepts has helped you. Believe it or not, the nature of electromagnetic waves, radio wave propagation and signal loss can be crucial knowledge for network administrators and technicians. This is just a small start to understanding radio theory. If you find yourself intrigued, get ready: electromagnetism is a fundamental force of the universe, and exploring it can be a fascinating experience.