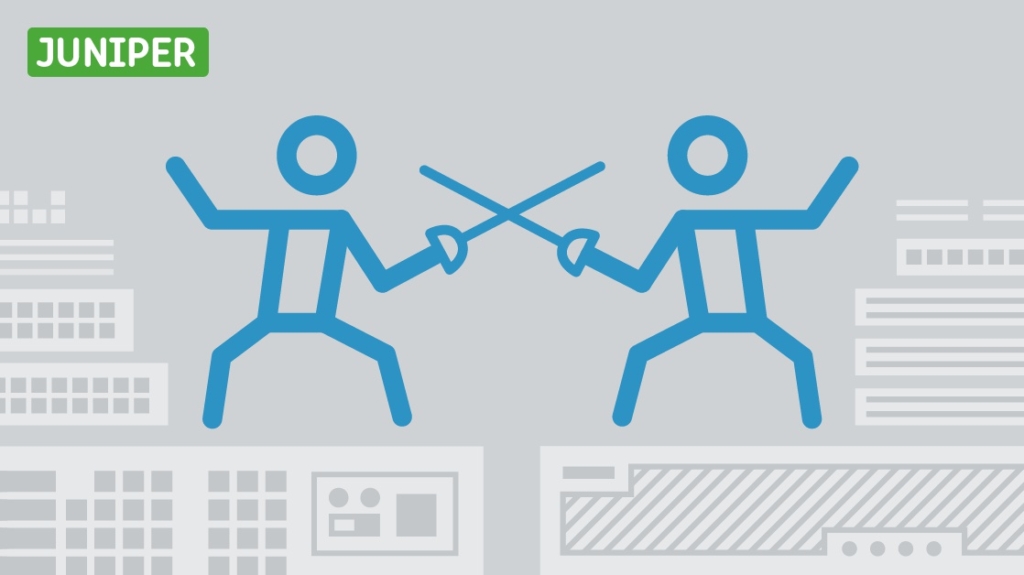 Cisco's CCNA is widely regarded as the king of networking certifications and many successful IT careers have been built on its foundation. It's one of those certs that can take you from setting up small office networks to working in shiny enterprise data centers and magnificent ISP backbone environments.

Cisco is, without doubt, the market leader for routing and switching hardware, yet CCNA-based certification paths are not your only ticket to enterprise-ville.

When considering a future career in any field, it's nice to have options, and you have an alternative to working with Cisco: Juniper Networks. Granted, Juniper is practically the only alternative, but hey, it's an option, and a great one at that!

If you are certified in CCNA or a higher certification already, it's never too late to delve into a new world of networking with Juniper products. We have plenty of Juniper training to get you started or help you advance.

In this post we take a look at the differences between Cisco and Juniper for those of you thinking about a change of scenery, and for those who are merely curious about their options. You might also want to take a look at our blog post, Crossing Over to Juniper.

During the dot-com bubble, Cisco was worth more than $500 billion, making it the world's most valuable company. However, Cisco barely had time to rest on their laurels before Juniper Networks came along and cornered over 30% of the service provider market with their line of core routers in the early 2000's.

And for the past ten years, Juniper has defended that market share valiantly. Although Juniper's U.S. market share for core routers in 2014 was only 24%, 2015 saw them bounce back up to 28% compared to Cisco's 49% share.

So what is Juniper's secret weapon? Speed. Always has been, always will be.

From the very beginning, Juniper has engineered their routers with specialized hardware that is custom-built for high performance and low latency routing, giving them the edge in hauling truckloads of data through large ISP networks.

In 2008, Juniper took their expertise in creating really fast routers for ISPs and applied it to the enterprise market, with mixed success. While some were expecting to see another spectacular market-grab away from Cisco as in the service provider market, Juniper's foray into enterprise routing and switching has been mostly confined to a niché market.

Which leads us to the next point …

Juniper experts are much harder to find than other certified pros. Following the law of supply and demand, they also get paid more.

Juniper's rough equivalent of the CCNA certification is the JNCIA-Junos. SimplyHired.com/ indicates that CCNA certified professionals take home around $63K a year, whereas those holding a JNCIA are looking at $78K on average.

Similarly, a CCNA's earning power appears to be capped at about $100K, compared to $124K for JNCIA. (Obviously, results may vary based on other relevant experience, geographic location, and the organization.) Consider that JNCIA-Junos is Juniper's basic entry-level certification, and the rewards become even clearer.

Juniper's hardware is built from the ground up to be good at one thing: sending data to where it's meant to be as fast as machinely possible. This is achieved by custom ASICs (Application-Specific Integrated Circuits) which are essentially electronic chips designed to do some of the heavy lifting that would otherwise be done in software.

The operating system used in Juniper routers, Junos OS, is just as smartly designed. Based on FreeBSD, the main advantage of Junos' OS over Cisco's Linux-based IOS lies in its simplicity, flexibility, and modularity.

Only a select few of Cisco's high-end routers run IOS RX, which features built-in modularity, whereas the Junos OS was purposely designed to allow separate processes to act as modules in their own right. This means that when one process crashes, it doesn't bring the entire operating system (and network!) down with it.

Not only is the Junos OS friendlier toward crashes and bugs, it has also been traditionally more welcoming to the open source community than Cisco's IOS. Where Juniper's own software engineers have not accounted for a specific use-case, the developer community steps in with the Junos OS SDK and APIs.

The Junos OS CLI can also be integrated easily with Python, which dramatically increases the power of network scripting and automation.

When cloud computing and virtualization went mainstream in IT, network engineers must have felt a bit left out. Luckily for them, that's exactly where the future of networking is headed with the resurgence of Software Defined Networking.

Trailing in the wake of the virtualization craze, Juniper began pumping more resources into virtualizing the network paradigm using the OpenFlow Protocol and their own acquired SDN technologies like Contrail.

On the other hand, Cisco is also moving toward SDN with what they call ACI, but they haven't been nearly as enthusiastic about it.

On the whole, SDN is great news for the networking world, because virtualized networks are simply much easier to troubleshoot, configure, and maintain. And what does that mean for Juniper specialists? Well, less work, for one. But mainly, more possibility, more control, and more fun.

Juniper continues to prove that its innovation and commitment to producing high-quality products will equip it to not only hold its market share of the networking world, but to grow. IT professionals looking to expand their expertise beyond the Cisco universe may find that Juniper offers a compelling product that deserves real consideration.

If you're looking for alternatives to the Cisco world, Juniper might be a good option for you.