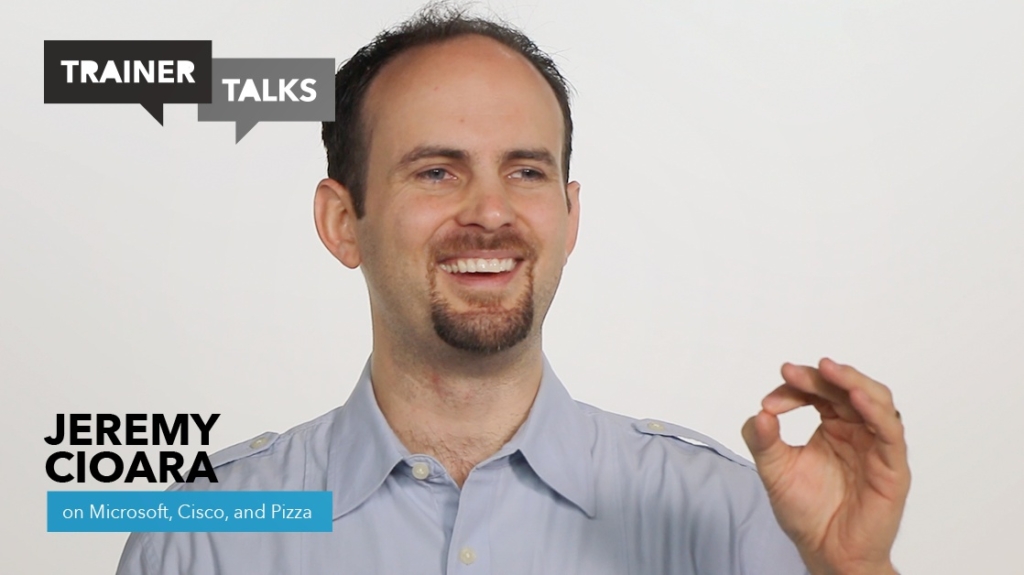 At one of our recent Trainerpaloozas, we got to talk to Cisco and networking expert Jeremy Cioara about a number of topics for the Trainer Talks series. During the course of our conversation, which has been edited and condensed for clarity, Jeremy discussed his frustration with Microsoft, the logic of Cisco, and working at Pizza Hut.

You can watch all the uncut Trainer Talks interviews on ourYoutube playlist, which we'll update regularly with more advice and stories from your favorite CBT Nuggets trainers.

I know you're a little biased, having done our CCNA training, but which would you recommend someone get into — Microsoft or Cisco?

I actually started in Microsoft, went to Novell, and then landed in Cisco, and they were all great.

Though, Microsoft is fun.

I'm not at all downing Microsoft, but it is an application that has just so much to it, so it reaches so far and it has so many moving parts that there are just a lot of bugs, and I didn't realize just how jaded that had made me.

With Microsoft, if you couldn't figure something out and nothing else is working, then you just rebooted, and that magically solved it. Rebooting was an acceptable answer until I got into Cisco. With Cisco, everything is so cut-and-dry and clean. Not to say Cisco doesn't have bugs, because they do, but at the same time, with Cisco the logic is very simple.

What do you mean that Cisco is simple? Is that a good thing?

It's ifs and thens. If this, if this, then this, and if you don't get that, then this must be wrong. You must have done something wrong.

No matter how much you want to deny it because you're so smart. You must have done something wrong, and rebooting won't solve the problem. And, that's so good.

When I reboot a device and the problem is still there, I'm like, "Thank you! Thank you!" It tells me that it's not some kind of weird bug, that it's just that I have to upgrade the operating system or something.

Okay, you've made your case for Cisco. What about Microsoft?

I would just say if you want a lot of job security, probably Microsoft because there's a lot of jobs available. If you want that clean, cut-and-dry, like, "This is how it works," and… It's like, you have this box of Legos, and what do you want to build? That's Cisco."

You have to know what's available to you. That's the biggest dilemma of IT, so many people go down a track of IT, but they don't know about everything else that's out there. I would say the number one thing is to know, what are the paths of IT?

A personal example, I went to college for computer science. Why? Because when I was a kid I liked computers, and my parents were like, "That's where you need to go. Go do the computer science thing because it has the word 'computer' in it."

And it was the most miserable time of my life going through that path, because I would say back then I was not built to be a programmer. And I actually went through college and then went to Pizza Hut because I thought, "This is not the place for me."

And then I realized Pizza Hut was also not the career for me. So ended up stumbling into a career path of IT that I had no idea even existed from that.

So the question, going back to the question, "How do you choose which path?" I would say the first one is to know what the options are before you, you know? If you only think there's a spoon but there's also a fork and knife, and all these other things that are there.

You have to know what's there, start there. Don't just go down something because it has the word "computer" in it.

If you're still looking for your IT career path, you can make informed decisions with our certification Roadmaps to Success and Career Pathways:

Engineering Your IT DevOps Career

Charting Your Cloud and Virtualization Career

As you work to advance your IT career, certifications are critical to demonstrate your knowledge and skills, as well as your commitment to ongoing learning. Follow your certification and training path to set your career on a trajectory that will help you achieve your professional goals.