What’s New with CompTIA A+? 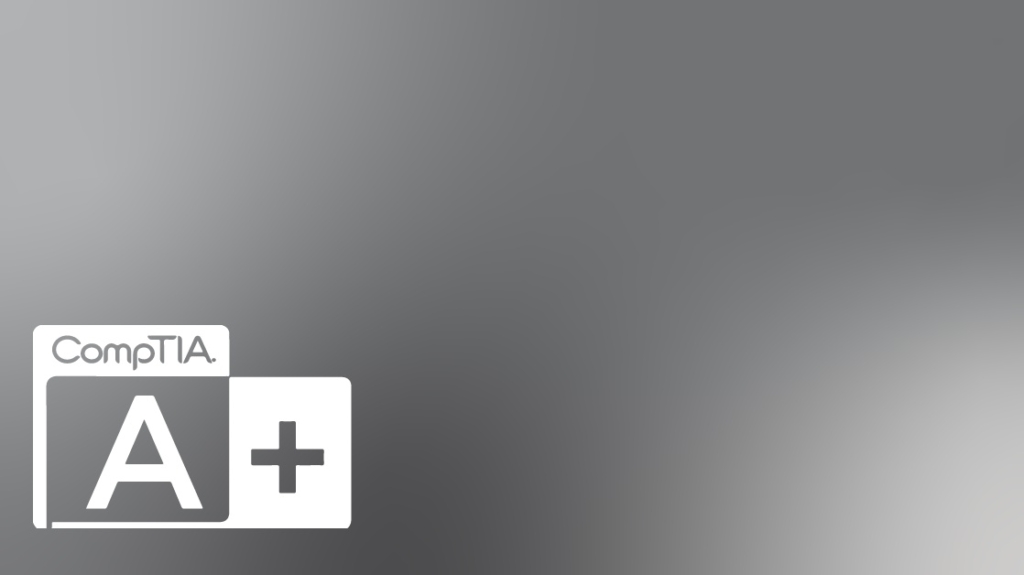 It took a little longer than expected, but the new CompTIA A+ certification is finally out! CompTIA released the Core 1 (220-1001) and Core 2 (220-1002) exams earlier this month to much fanfare. After all, CompTIA A+ is considered by manythe ideal place to start your IT training journey.

As with any certification exam refresh, there's plenty of new material included in the Core 1 and Core 2 exams. There are also topics from the previous 900-level A+ exams that are emphasized more on the new 1,000-level ones (Hello, cloud and virtualization). All of this is covered in our training courses. These courses are designed to help you learn CompTIA material quickly and efficiently.

Here's a look at the new CompTIA A+ exams — including what's new and what stayed the same.

The Nuts and Bolts: Exam Format

Before diving into what's new with the Core 1 and Core 2 exams, let's quickly cover what's stayed the same. You already know that CompTIA A+ certification requires passing two exams. Like the previous 900-series exams, there'll be a maximum of 90 questions, which need to be completed in 90 minutes.

Finally, the recommended experience before sitting for these exams still is nine to 12 months IT experience or lab work.

Getting to the core of the exams

The CompTIA A+ Core 1 (1001) exam focuses primarily on hardware and network troubleshooting. Learners who took the beta exam said it was the easier of the two exams. They noted the exam's straightforward nature and focus on the basics resembled the 900-series first exam.

Those who have taken A+ exams likely noticed something exciting about the Core 1 exam breakdown. For the first time, virtualization and cloud computing have their own domains on the CompTIA A+.

What to Expect: Diving into Core Topics

Every A+ version brings new skills into the exam. The CompTIA A+ certification has always covered a breadth of foundational topics. In this latest version, CompTIA included cloud, virtualization, operating system versions, cybersecurity, and even scripting.

It was bound to happen: More cloud and virtualization Historically, CompTIA referred to its exams as either "software" or "hardware." But with the cloud coming into play, technology as a whole is more fluid — leading to some fluidity between these two formerly hard-set topics. So, CompTIA focused more of its A+ certification exams questions on cloud applications and virtualization.

For example, you might be tested on your knowledge of software as a service (SaaS), since end users may need help troubleshooting SaaS applications. Whereas the previous A+ exams focused on laptops and mobile devices, the new A+ exams cover IoT devices, in regard to both hardware and device connectivity.

The bottom line is test takers who sit for the new CompTIA A+ certifications exams can and should expect more questions relating to cloud-based technologies. And that's a good thing. It can only prepare learners better for IT careers — and drive the value of A+ certification upward.

Operating systems, galore! The thing that caught our eye was how much of the CompTIA A+ Core 2 (1002) exam is devoted to operating systems. More than a quarter (27 percent) covers OSes. In addition to the past four Windows OSes, the exam also includes questions about Linux, Android, iOS, and Chrome OS.

At first, all the attention spent on operating systems might seem overkill. But the primary focus on A+ is still on the entry-level IT technician, which means support.

Whaaat?!? There's scripting Perhaps the most surprising addition to the new A+ exams is scripting. CompTIA believes that it's an important tech support tool. Scripts are used by organizations to automate a wide range of services from software patches to call processes.

For the new CompTIA A+ exams, you'll want to know the difference between script file types, including .bat and .js. You also could be tested on basic script constructs like loops, and on data types like strings.

With the inclusion of scripting, new A+ exam takers would benefit from a basic understanding of bash scripting and high-level programming languages like Python. Yeah, this isn't your father's A+ exam — or even the 2016 version, for that matter.

Who doesn't need more cybersecurity? Previously, to earn CompTIA A+ certification, you only needed a basic understanding of cybersecurity. As long as you could recognize common network threats, you were good to go. That's no longer the case — and that shouldn't come as a surprise.

Recognizing organizations are starved for pros who can keep networks and data safe, CompTIA beefed up the cybersecurity content for the new A+ exams. Here's a sample of learners now are expected to know:

All of these are a step up from the basic security concepts of the 900-series exam, such as ransomware or WiFi encryption types.

But here's the really exciting part — the A+ exams also test your ability to detect, remove, and prevent threats such as malware. For example, you might be presented a scenario in which you need to remove a trojan virus from an end user's computer. What tools do you use? How do you ensure that the computer doesn't get affect again?

Clearly, memorizing key concepts and terms isn't enough anymore. You've got to be able to apply what you've been learning to scenario-based questions. Those questions aren't limited to threat detection. You need to know how to choose the right security settings for different OSes — or which best practices to implement for securing workstations.

We couldn't be more encouraged by CompTIA's increased focus on cybersecurity. There's always a demand for InfoSec skills. Introducing more advanced, in-depth security material on the exams better prepares learners to enter the IT security realm.

Stay the course — or chart a new one?

If you're brand new to IT, the new exams couldn't have come at a better time. IT is always changing, so it's important to have the most up-to-date knowledge and skills. Taking the new exams is a no-brainer if you haven't started studying for the A+ — or haven't decided where to start your certification journey.

However, be warned there might not be a lot of study materials for the 220-1001 and 1002 exams, yet. CompTIA typically announces a new certification alongside the old certification's retirement date. The overlap provides time for vendors to develop training resources for learners. Our very own Anthony Sequeira is creating training for the new A+ exams as we speak. If you want to get a general feel for the A+, check out Anthony's 220-901 training.

What if you've been plugging away at the 220-901 and 220-902 exams? Good news, your hard work isn't for naught. Go ahead and plan on taking those exams. You've got until July 31 to do so. You might be thinking, "But what if they aren't the most recent exams?" Don't worry, the skills validated by the 900-series exams still are highly relevant.

If you perform a Google search for CompTIA A+, you'll find a lot of debate about CompTIA A+ certification. More specifically, some IT pros think the exams don't really prepare you for an IT career. Others, like Sequeira, stand by the value of the certification. There's a reason so many people earn A+ certification as the springboard for their IT careers.

It's hard to not to be impressed by the increased focus on cloud, virtualization, and cybersecurity. Those three topic areas continue to be driving forces — even at the entry level. With that in mind, we'd argue the A+ Core 1 (220-1001) and Core 2 (220-1002) exams prepare learners to handle IT's shifting landscape far better than its predecessors.