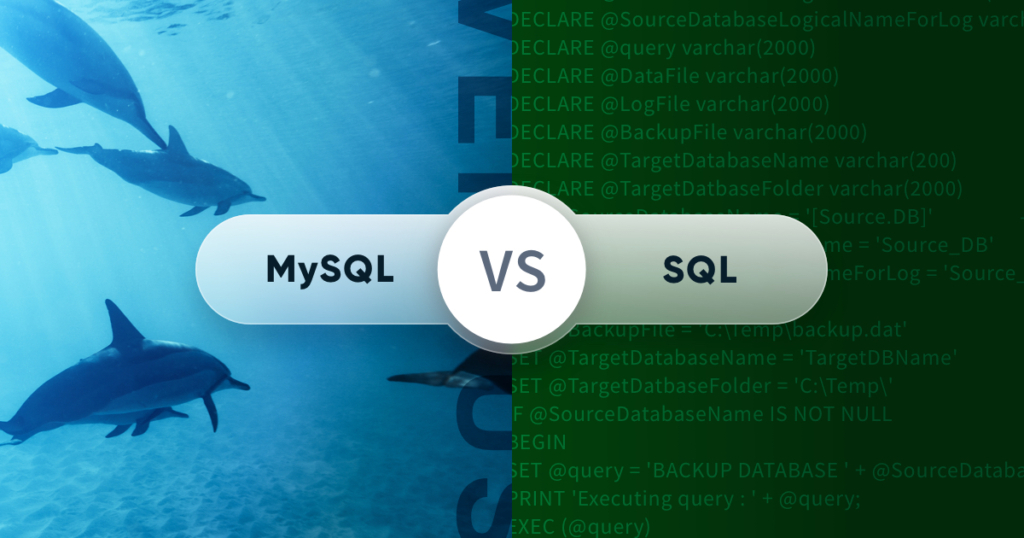 Among the most commonly used enterprise database systems are MySQL and Microsoft SQL Server (MSSQL). Microsoft developed its own relational database management system (RDBMS), whereas MySQL is an open-source RDBMS.

Microsoft offers a variety of versions of MSSQL Server to meet a company’s individual needs and budget. It is important for database administrators and programmers to be aware of the differences between MySQL and MSSQL before making their decision, in order to ensure that they choose the best RDBMS for their requirements.

The purpose of this post is to compare the performance, features, similarities and differences between MySQL and MSSQL — and also explain when MSSQL Server is a better choice than MySQL.

Are There Differences Between MySQL and MSSQL?

Yes, there are many differences between MySQL and MSSQL. Databases are ideally suited for SQL, one of the most popular languages for retrieving, editing, or storing data-as this is how dynamic applications and websites function.

Both MySQL and MSSQL are relational databases, meaning that each record/row contains a set of related data. These records can then be referenced in other tables to retrieve additional information about related items.

Both also use SQL syntax, so the code is largely similar when manipulating data. However, there are some differences between how variables are named for MySQL and for MSSQL.

Other similarities include the availability of GUIs to simplify database management, as well as similar commands, such as BEGIN TRAN to start a transaction. Other differences include programming language support. MySQL supports C#, JavaScript, Java, Perl, PHP, and error handling. MySQL returns errors in the form of warnings or notices), and data types.

MySQL has different advantages over MSSQL, mostly because it is free, open-source software. MySQL is easier to install and use with PHP applications. It has significantly better performance using web scripts because of its support for PHP code on the server side, whereas MSSQL does not offer this same functionality.

MySQL also offers better support for writing concurrent Java programs that access databases. Some other benefits include the ability to run multiple servers on one computer, better support for geographic information system (GIS) data and spatial queries, support for Nibble values, and faster replication of databases.

MSSQL offers superior performance when using languages such as C/C++ or .NET languages. It is also more scalable than MySQL and can be used for multiple applications.

Similarities Between MySQL and SQL Server

Let's cover some more similarities between these two products. Although many developers specialize in either database type, they share many other similarities.

The underlying architecture of MSSQL and MySQL differs quite a bit, which means that  the core functions of the systems behave quite differently. In short, MySQL and MSSQL work in a different way at their core.

Both databases also use SQL language for managing data; therefore it is necessary that all developers have good SQL knowledge.

Data is stored and returned as quickly as possible through your database, which acts as a foundation of your applications. Microsoft SQL Server and MySQL provide fast data storage and retrieval.

Relationships between tables are established using primary and foreign keys on both platforms, so they are  very similar in that respect.

Among web application databases, MySQL is by far the most popular choice due to the fact that it costs nothing for providers to offer it to their users.

You can usually choose between MSSQL and MySQL when you sign up for hosting, although MySQL is normally offered for free, while MSSQL normally has an additional cost associated.

How Well Do They Scale?

Scalability is a feature of both platforms. Both of these systems can handle millions of transactions a day and are suitable for both small and large projects.

You can expect some small differences across CRUD statements of these two platforms, although you’ll find that the syntax is still quite similar.

There is a driver for almost any popular language available via the Internet. With this feature, it is easy to connect to both MySQL and MSSQL without having to code anything complicated.

Applications such as Microsoft Excel will allow you to connect to MySQL or MSSQL databases with a connector driver, making the process very easy.

The interfaces of these platforms are similar, but they do not operate the same way, even though the basic standards of relational databases are the same.

It is most often the underlying architecture that causes these differences, which means the average user usually doesn’t even notice them.

Although these differences are important for DBAs to recognize because they can affect how you decide to proceed.

Compatibility with other platforms

Companies are now able to choose between three different platforms for their database systems. Despite the fact that Mac OS X and Linux can run SQL Server, certain features are not available.

SQL Server supports a variety of languages, such as C++, Visual Basic, PHP, Ruby, Python, Delphi, Java, and Go. Many developer communities use MySQL because it is flexible and versatile when used for creating applications.

The two database types (MySQL and MSSQL) are both compatible with Windows and Linux projects, but MySQL works well with PHP, while .NET utilizes MSSQL primarily.

There is no cost for MySQL, although you may need to pay for support if that is something that you require. Due to the fact that licenses are needed for the server running the software, running Microsoft SQL is more expensive.

If you are starting out with a project of your own, then MySQL could be the  best choice for a database type. MSSQL is available at different price points depending on how many servers you plan on using , whereas MySQL is completely free.

When it comes to support and compatibility, Microsoft SQL Server may be the better choice because of its built-in services and easily customizable platform. However, since MySQL is

You must extract data as SQL statements when backing up MySQL data. While backups are taking place, the RDBMS allows blocking of the database. Switching between MySQL versions minimizes the possibility of data corruption.

A database query can be truncated while in progress without terminating the entire process.

A transaction engine is also used by MSSQL to maintain consistency. MySQL does not have this capability.

SQL vs MySQL: Which Database Management System Should You Use?

In general, you should focus on factors that will affect your project and requirements. Additionally, when selecting a data management system for your next project you need to think about the pricing and level of support that you will require.

MySQL might be the better option for you if your data does not need to be highly transactional or verified, and if your budget won’t allow you to purchase a commercial solution such as MSSQL.

There are many RDBMS systems out there. Before choosing one for your next project, you may want to do some research and testing. Different systems have different strengths and weaknesses.

Several large projects use the open-source MySQL database management system. Microsoft developed its own RDBMS, whereas MySQL is an open-source RDBMS.

Though both are considered enterprise systems, MSSQL Server offers a variety of versions to meet your company’s individual needs and budget.

DBAs and programmers should be aware of the differences between MSSQL and SQL Server before making their decision in order to ensure they choose the best one for their requirements.