Why Still Use a Ring Network Topology? 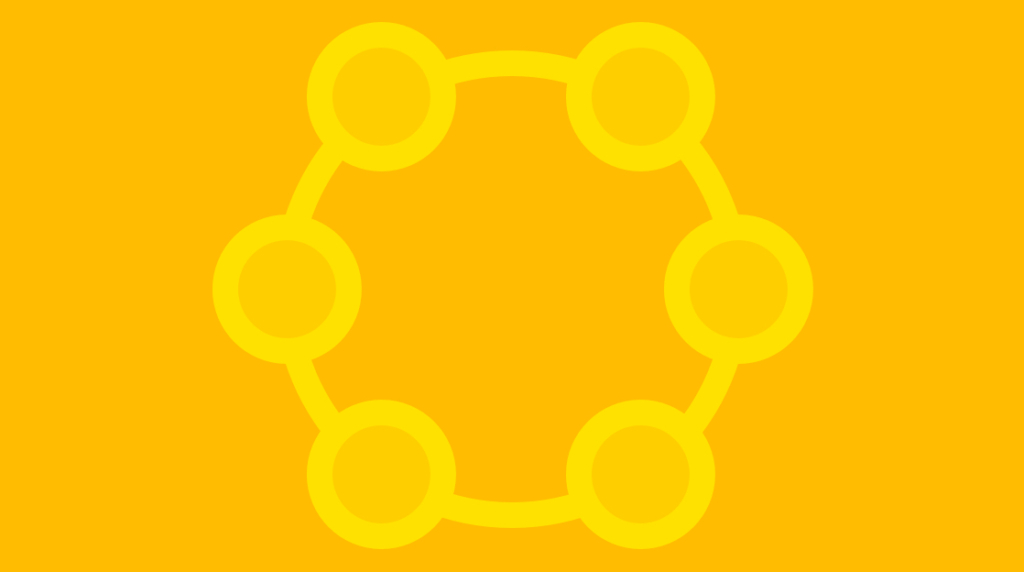 Ring network topology is still covered on various network-based certifications such as CompTIA Network+, despite being an older and legacy topology. During its heyday, it did combat some serious limitations with Bus and Star topologies.

Bus topology is similar to a ring topology with the distinction that it has a clear start/stop and fairly linear. It uses what is called terminators on each end to prevent the signals from colliding with itself. Star topology is more prevalent these days. It involves a device, usually a switch, in which the network runs directly to. This helps prevent a single run from causing the entire network to be brought down.

Let's dive into these different topologies including their pros and cons and how they are used today.

What is a Ring Network Topology?

A ring topology is a topology that creates a circle such that each node is connected to two other nodes. Because every node is connected to two others, there is no beginning and no end. It is easiest to visualize this as a circle or ring. In a basic ring topology, data typically travels in one direction. The data goes from node to node until reaching its destination.

Early on, there were few implementations of ring. IBM's Token Ring was the earliest of them and allowed for a single ring over copper. IEEE 802.5 was the standardized version which had similar speeds and a singular ring but did not officially define a medium required. Finally FDDI was the higher end solution with dual fiber rings. This allowed redundancy of the rings and allowed for longer distances due to fiber instead of copper. The dual rings operated in different or opposing directions. 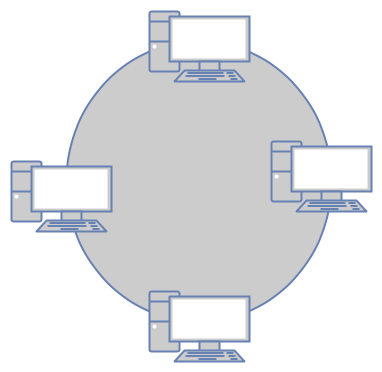 Equal time share for each node. This helps to avoid the noisy neighbor problem where one node tends to take the majority of the time and bandwidth on the network.

Everyone takes their turn talking. It was important in early topologies to avoid collisions. The early competitor to the Ring topology was the busy topology which had a high affinity for collisions.

No collisions. The lack of collisions leads to more time sending actual data instead of transmissions being halted to retries and avoiding further collisions.

Ring requires continuity. While this may not seem like an issue, a failed network card in one of the machines could lead to the entire network segment being brought down.

Cost. In order to help mitigate the continuity issue and traverse long distances, FDDI was required which was the most expensive ring implementation.

Difficult to wire. This is likely the main reason it has become mostly extinct. Running a single or dual ring required quite a bit of cabling. It can be difficult to architect the wiring necessary to facilitate this type of topology.

Ring topology is an important part of networking history. It solved a few issues that bus and star topologies had at the time such as collisions and the ability to prevent a "noisy neighbor" from stealing all the bandwidth on the network. At some point, this topology may make a comeback. As the saying goes, "what is old is new and what is new is old".

What is Bus Topology?

Most people's experience with networking from the mid 1990s and earlier probably involves using a Bus Topology. It used a coaxial cable much like for cable television today. Each workstation had a network card and a "T" connector that allowed for a cable to connect to the next node on each side. If the computer was at the end of the bus, a terminator would be installed on one side instead. 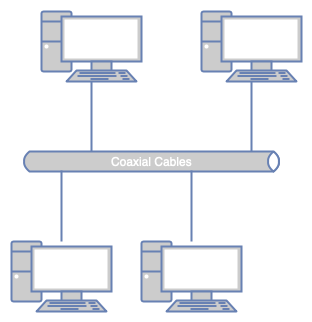 Bus topologies had the advantage that they were fairly economical and easy to troubleshoot. In small office settings it was easy enough to run coaxial cable from one office to the next. In cubicles, it could just be run on the floor between them. Terminators and "T" connectors were fairly economical as well. Length of cable required was minimal.

Economical. This topology had some of the more economical options at the time. This included the cables, connectors and terminators.

Ease of setup. As long as your cables were in working order as well as your terminators, this topology mostly just worked.

Minimal cabling. Because these ran from node to node, the shortest distance between nodes could be wired instead of back to a central termination point.

Bus topology does come with some disadvantages. An issue at the machine level, or even a terminator, could cause a lack of communication for the entire bus.

Fault Tolerance. This topology was not very fault tolerant as any piece of equipment on the bus could bring the network down. This could be a bad terminator or even in rare cases a motherboard shorted to a computer case.

What is Star Topology?

If you are a network administrator or have paid close attention to recent network build outs, star topology is the one currently used in nearly every scenario. It involves what is called "home runs", from each network outlet to a network switch. The common cable of choice for this is Category 5e or higher. The higher the numerical value, the more twists per inch the cable has.

These twists help prevent interference from things like electrical wires or lighting when cables are run in the ceiling. Higher-rated category cables are also able to accommodate higher network speeds. For longer distances or areas with extremely high interference, Fiber optic cables can be used. 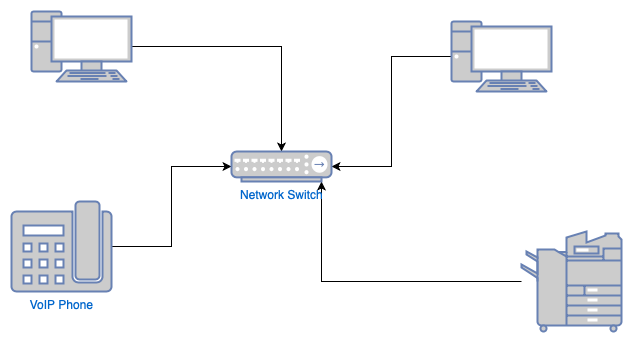 The ease of use and durability of this topology has made it the forerunner of topologies for Local Area Networks for quite some time. A cabling issue typically isolates that issue to the specific node the cable runs to. When running cable, the installer simply needs to know the server room or panel they are running to and where the outlets need to be run.

Durability. The fact that a single node can not typically bring down the entire network is a huge plus. Connectivity issues can be isolated to a singular cable run.

One of the main disadvantages of this type of topology is that it does require a bit more cabling than other topologies since each run goes back to a switch. An office may have multiple runs in it for different walls. In other topologies, that office would have one run into it and a run from one wall to the other and then a run from that office to the next office and so on. The cabling requirements are much less in that scenario.

The star topology is the most advantageous for most scenarios. It does have the minor setback of requiring much more cabling but due to the cost of the cable and the benefits, it is not doubt as to why this is the majority of the topologies in use today.

Why is Ring Obsolete

With the advent of ethernet switches and faster ethernet connections, most of the collision and bandwidth issues were resolved. These days, for LAN connections, star topologies tend to prevail thanks to switches. For WAN links, many times a point-to-point link exists but at the core, carriers are using Layer 3 switches and routers much like LAN topologies do.

Bus vs. Ring vs. Star Topology

This is less of a competition than a progression over time. Originally bus and ring were competing topologies until star entered the scene — and it has nearly eradicated the other topologies due to the benefits it provides.

While the ring topology may not be in use, it is always best to understand historical architectures to learn from them and their ideal use cases. As new technologies and scenarios come out for networking needs, older technologies may need to get resurrected. On the other hand, use cases where ring topologies are a poor choice need to be understood so they are not resurrected when they should not be.