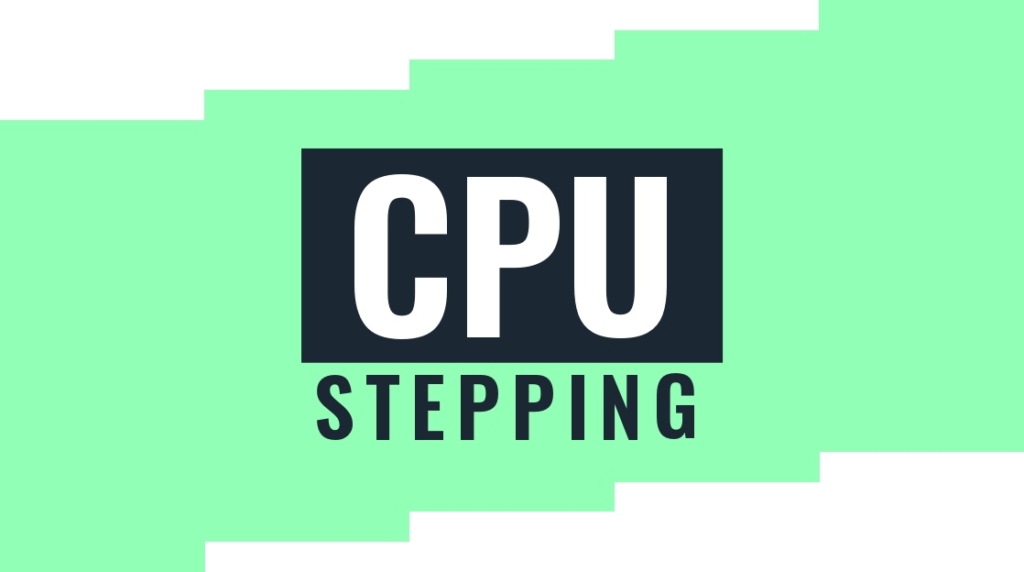 The lifecycle of a microprocessor chip in your CPU goes through many iterations before you ever power up your computer. And with faster and more efficient processors making their way to market, microprocessor chip manufacturers use a standard method to designate improvements, upgrade, or error fixes. Or to introduce completely new versions.

A new microprocessor chip may not come to market on a yearly cycle, similar to the latest cell phone in your pocket. But that doesn't mean that the current chips in the latest computers aren’t continually improved. Manufacturers like Intel, AMD, NVIDIA, and Apple constantly revise and refine their microprocessor chips for the best performance and efficiency possible.

Sometimes these efforts result in a re-design or a major remodel, resulting in an entirely new microprocessor from the current ones. Performance and architecture are significantly enhanced. Most often, the changes are minor, making incremental improvements to existing logic or parts. We often see these changes released as new core generations rather than a new core altogether.

The designation process they use to track these changes is called CPU stepping.

What is CPU Stepping?

The life cycle of a microprocessor isn't much different than most other items in the tech industry. New microprocessor chips are not typically released on an annual schedule, but the impact is noticeable when the latest version hits the market. Conversely, the available microprocessor chips constantly get improved and iterated to make them more efficient.

The concept and application of iteration — in CPU chip process creation or other areas — means the varying degrees of changes and improvements a given process or product goes through to make it better.

As the changes to existing microprocessors are numerous — working to remove bugs, eliminate logic errors, or improve performance. Each change, no matter the size, scale, or scope, gets cataloged with a letter-number combination. A new release might begin with A0, for example. As this microprocessor is improved after release, the designation will change to A1 and the next to A2, and so on.

When there are significant changes, the designation will change to B0, indicating an entirely new microprocessor, and the process starts over again. No matter the alpha-numeric designation, the entire iterative process is always in the name of increased performance and efficiency for microprocessors for a CPU.

How Many CPU Stepping Iterations Does a Typical CPU Go Through?

Throughout the lifecycle of a microprocessor chip, there are countless adjustments, bug and error fixes, and performance improvements. It is typically more common to see different versions of microprocessors, such as A5 to A6, than it is to see an entirely new stepping.

Intel continually iterates on its most powerful chip offerings. The most recent R0 is the latest stepping put out by the company. While there typically isn't an annual release of new microprocessor chips, similar to the release cycle of many internet-connected devices, it marks a significant milestone when there is a major new release. Either way, CPU stepping is an integral part of Intel's microprocessor development.

AMD progresses through similar development cycles, as its Ryzen line of processors is on its third generation after being released in 2016. Additionally, Apple re-entered the microprocessor development competition for computers with its M1 chip (ironically ending a business venture with Intel for their microprocessing chips).

Apple silicon has been developing chips for its mobile devices for years, despite the anticipated release of the M1 chip. Apple uses a similar CPU stepping methodology with its microprocessor iterations. The Apple A-series, which powers the iPhone, has versions from A4 (2007) to A15 (2021). The S-series used in the Apple Watch is currently on S7.

Is CPU Stepping Necessary When Upgrading a CPU?

Whether you consider the current version of the microprocessor in your CPU when purchasing a new computer depends on your computing needs. As a general rule, the latest and fastest CPUs on the market come with a comparable price tag. More affordable options come with less storage and somewhat slower CPUs.

If a CPU stepping version is problematic or has known issues, knowing the alpha-numeric designation helps to avoid them, especially when buying used computers or creating a custom-built one. For the fascinating world of tech collectors, CPU stepping is a way to search for highly sought-after hardware.

What's the Benefit of CPU Stepping?

At first glance, the benefit of CPU stepping might seem obvious. Continually improving a CPU's micro processor's performance and efficiency improves the overall user experience with an easy way to designate the changes. Or completely redesigning a microprocessor brings the latest and greatest to market, starting the designation over. While this is true, that is not the only benefit to CPU stepping.

For the average consumer in the market for a new home computer, the need to focus on CPU stepping is likely minimal. However, if you custom-built a desktop and look to upgrade the microprocessor chips on your board, knowing the CPU stepping is significant, if not an outright must.

CPU stepping is more of an industry-used designator and is very effective at keeping track of changes to microprocessor chips, both interactive and across major revisions. These alpha-numeric designators often make effective marketing material with packaging and advertisements, putting the current stepping of a microprocessor front and center.

For collectors and those deeply immersed in custom computer builds, CPU stepping provides valuable information for highly sought-after items or to match what currently exists in a CPU.