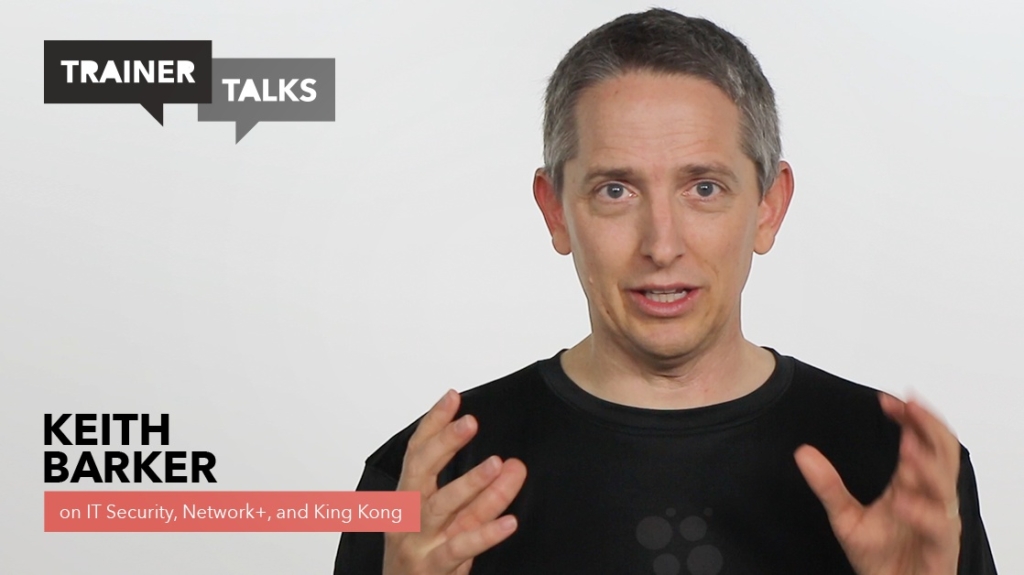 A while back at our Trainerpalooza, we had a chance to sit down with our expert Cisco, networking and security trainer Keith Barker for what everyone would agree was a very long interview. But it didn't faze Keith even a little bit. Here's a little excerpt from our interview.

Over the course of our conversation, which has been edited and excerpted for clarity, Keith discussed King Kong, Switzerland, and why someone might want to join the CCNA club.

You can watch all the uncut Trainer Talks interviews on ourYoutube playlist, which we'll update regularly with more advice and stories from your favorite CBT Nuggets trainers.

What would you tell someone who is considering getting certified in a technology?

So, certification is a demonstration that a vendor has basically stamped using, "This person has this basic set of information." For instance, CCNA is the number one, no-holds-barred certification for networking technologies on the planet today. The reason is because it's respected and viewed by employers as a basic requirement for anybody who wants to deal with networking.

Okay, so Cisco. CBT Nuggets is often considered to have the best Cisco training out there. Why would you tell someone to get Cisco certified?

Cisco certification is pretty important because it is like King Kong.

Where does King Kong sit when he's tired? Anywhere he wants.

Cisco is the largest player, and so if you want to play in the space of networking in the 21st century, at least for this decade, Cisco is the number one player. You're going to run into their content, their products, their technology, and they have great products and technology.

So, as far as Cisco certification, CCNA is a beginning point. There's thousands and thousands and thousands of people every month who get that certification, and if you join a club, you have to go through initiation rites, I would say that the initiation rites for IT would be Network+ for basic understanding, and then vendor-specific CCNA for a route switch from Cisco, and then from beyond there, you can expand.

You do the Network+ certification training for CBT Nuggets. In fact, everyone in our office has used your training to complete Network+. What can you say about CompTIA?

CompTIA is a fantastic, vendor-neutral way of getting into the basics of virtually any aspect in IT — servers, storage, virtualization, networking. So for somebody who is just starting, CompTIA has a fantastic, entry-level method to help verify your basic set of knowledge. Now, it's not just the exams. It's also the preparation and the content you'd study that CompTIA wants to make sure you can demonstrate.

So I love CompTIA, the fact that they're like Switzerland. They're neutral.

In addition to Network+, you're also our security guy. You do the Certified Ethical Hacker course. You do the Security+. What would you recommend for security best practices?

It's pretty basic, really. If you have confidential data that you care about, make sure it's encrypted on your computer, so encrypt the file and save it on the computer. And then in the cloud, if you want to save it there as well, like Dropbox, or some online service, encrypt as well.

And don't use your passwords in a file that is not encrypted, where if somebody did compromise your computer, they would have all your passwords.

I do. But, what I would recommend you do, which is what I do, that password file is encrypted so it can't be opened without multi-factor authentication in my case, or just a password to unlock it.

So, keep your passwords safe. Don't use them over and over again. And if there's something that's really, super critical, you may not want to keep it on your computer. You may want to print a hard copy and then physically secure that in a couple of locations if you really need to protect your data.

The chances of being compromised on a computer today are so great, that anything really confidential you need to have encrypted and with a pretty tough password.

Because at the end of the day, there's only two types of people regarding security: people who have been attacked and people who will.