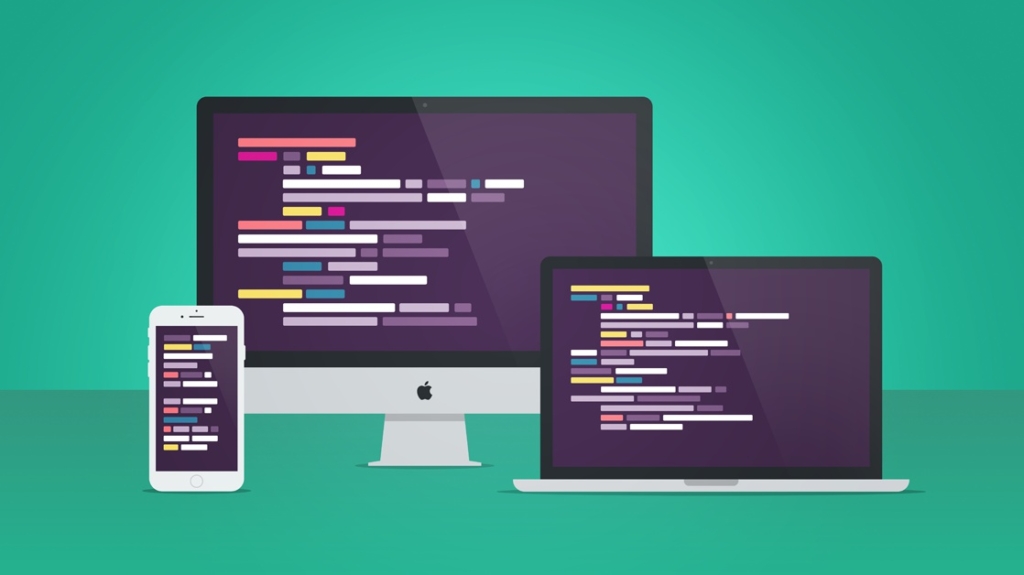 Are you ready to take the next step in your career as an Information Technology (IT) professional? Have you scanned job postings, only to question if you've learned enough about JavaScript, Python, or HTML to claim proficiency on your resume? If you want a leg up as you look for new, exciting opportunities in IT, investing in online training may give you the edge you're looking for.

With so many options, it's tough to know which languages and skills are the most worthy of investing your time in. Training – such as learning Linux or taking an SQL course – can open new and exciting chapters for your professional development.

We analyzed data from Stack Overflow to see which languages and skills were mentioned the most in job postings. We then compiled the results to serve as a guide for your targeted IT training.

Why waste time learning multiple coding languages, only to find out that they're not in demand by employers? You need to know exactly which skills are most in demand, not just to impress your boss or a recruiter, but for your own professional development. This enables you to properly prioritize and align your training with your career goals. Investing in online classes and certifications that work around your schedule, whether it's as specific as Linux Training or as broad as Project Management Training, might tip the scale in the hunt for your next job. 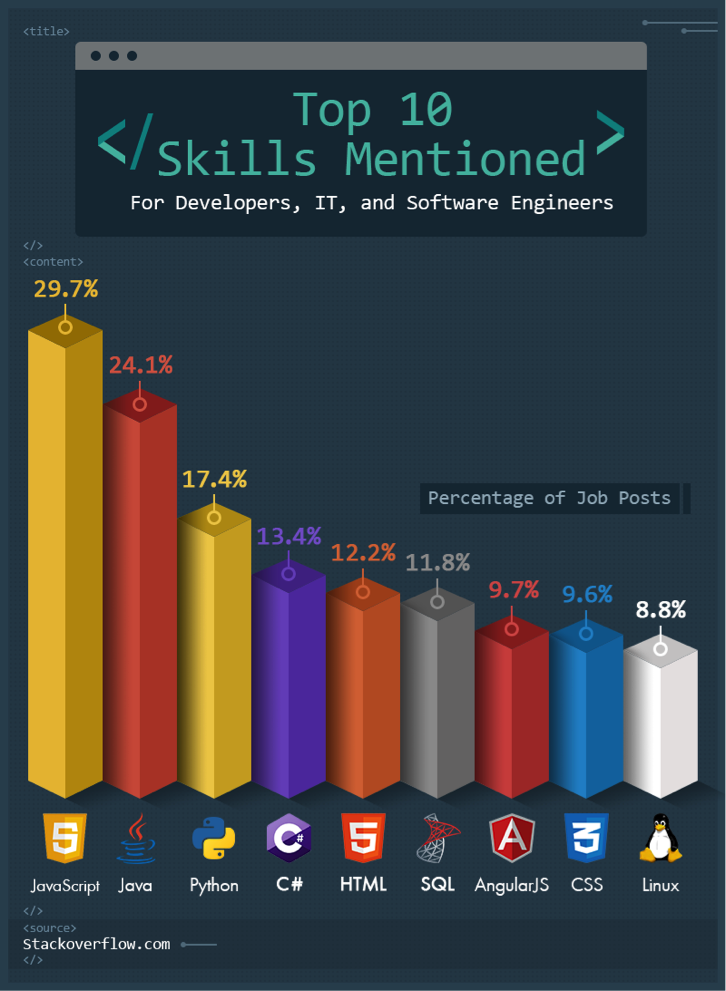 Python Training could give you an edge in your hunt for a new opportunity – almost 18 percent of all job postings we found mentioned a need for programming fluency in this particular language. Eight out of 10 of the top computer science programs in the country use Python to teach coding; it would be beneficial for you to master Python, used to create automated test frameworks or build scripts, which will help you remain competitive with future graduates. Python has a stronger similarity to a natural (English) language, making it easier for beginners to jump in immediately. You could start your online training today to get ready for a better career in the future.

Learning a single language gives you an advantage, but the polyglot approach might give you a greater edge both on the job and during the interview.

According to the data we reviewed, most companies are looking for either Java or JavaScript knowledge in addition to another language. Though they share a name, these languages are less like brother and sister and more like second cousins. Java is responsible for producing stand-alone programs (such as the popular video game Minecraft, or various Android applications), while JavaScript is used for web development and creating interactive websites.

If you already have an understanding of C++, you may wish to complement your knowledge by learning Python and Java. Based on our research, C++ comprehension ranked in the top five for both of those languages when listed on employers' job descriptions.

Just like you'll want to know some Italian if you're in Italy, or some Russian if you're in Russia, you wouldn't want to practice a language that doesn't align with where you want to be. When looking at the job postings across several states, Java and JavaScript emerged as the top two skills in demand by companies. Only Python, in New York, appeared beyond those two. Odd given its pervasiveness in IT environments, Linux appeared only once in the top-five lists in California. 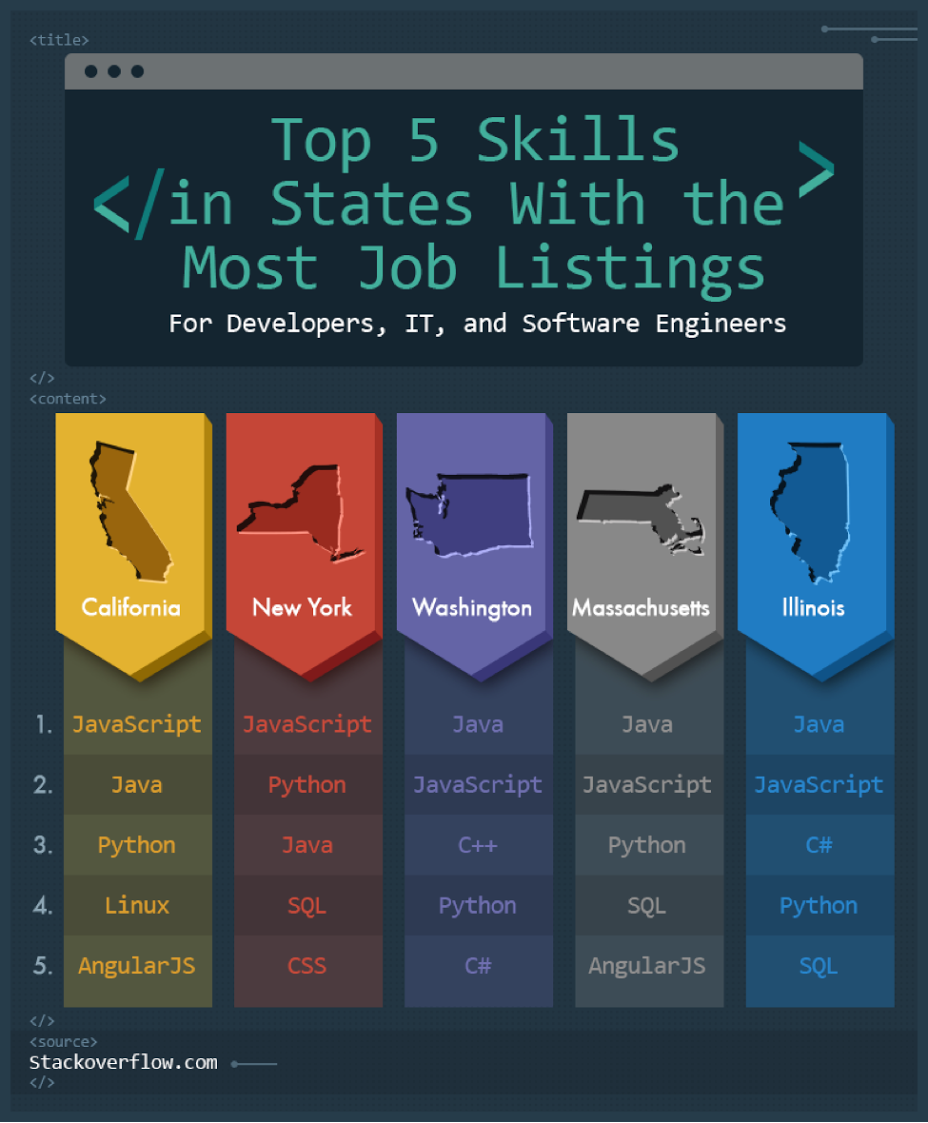 Learning Linux and its essentials provides you the chance to further expand your programming skill set. Linux is an open-source technology and almost mandatory for supporting any type of server environment in a professional setting (even some of Microsoft's cloud services run on Linux). Having a great foundational understanding will help you prepare for working in multiple types of Linux environments.

The State of Code

Depending on where you live – and the languages you already know or are considering learning – you may or may not be living in the right state. In addition to examining which languages and skills pair best, we also looked at which states ranked the highest in job listings mentioning a specific type of code. 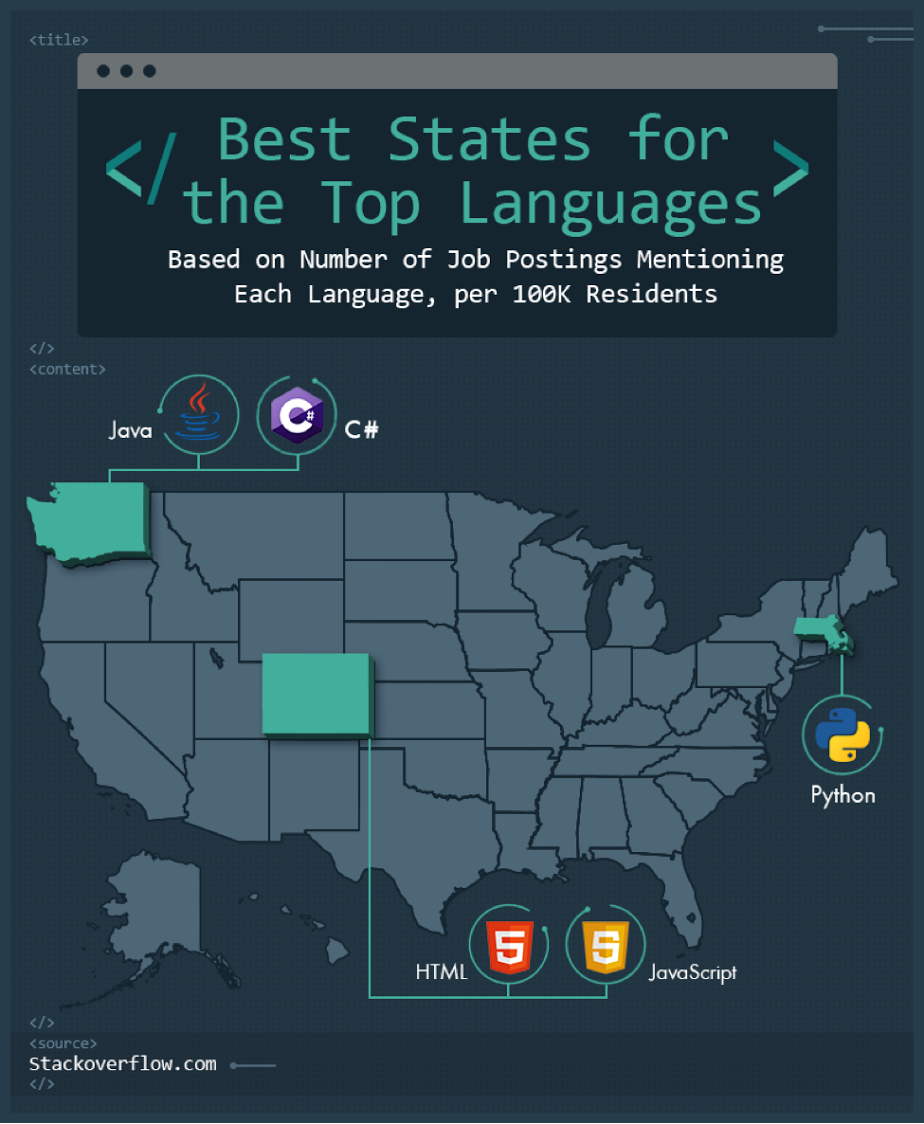 JavaScript and HTML paired together supports the enhanced development of both desktop and mobile websites, so to see them both mentioned for the same jobs makes sense. This is why it wasn't a surprise that the same state, Colorado, came out first for postings calling for these languages. So, investing in courses to improve your fluency with these in-demand languages might just take you to the Mile High City of Denver or the ski havens of Aspen or Vail.

If you're looking for a particular job or role – "Senior," "Head," "Full-Stack," or "Engineer" – there are specific languages and skills that get mentioned the most over multiple job postings. 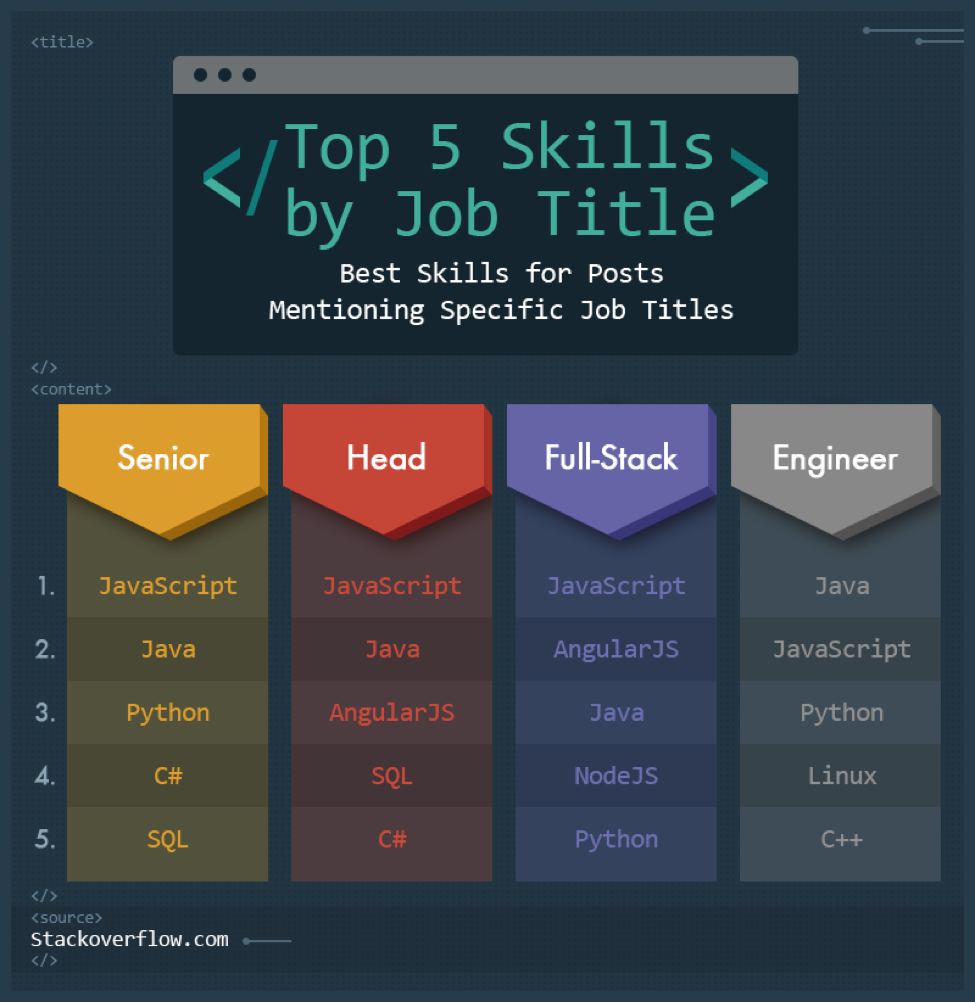 For postings with the first three titles, JavaScript references reigns supreme. It's the most commonly mentioned language on job positions featuring those titles (and it came in second for engineering jobs). Java ended up either first, second, or third on all of the listings. Python, mentioned earlier, returns to appear in positions listed as "Senior" or "Engineer," showing its value as a language you'll want to learn.

C# makes an appearance in job descriptions that include the words "Senior" or "Head" in the title. There are other languages, like Node.js, that are mentioned for "Full-Stack" jobs, but they didn't rank in the top five for any of the other jobs we examined.

Your Path to Success

Becoming fluent in your first, second, or even 10th programming language only helps to make you more marketable to potential employers. It might also unlock opportunities in your current job, letting you seek more advanced roles or new career experiences.

CBT Nuggets offers IT training and certifications that you can work on any time via apps on iOS or Android.

We analyzed 1,798 job postings from Stack Overflow to see which languages were tagged most and which combinations of languages were most common as well as location information.

Feel free to code these images into your next publication. Just make sure you link back to this webpage so the developers (and authors) receive proper credit for their language on language.