CBT Nuggets uses cookies to give you the best experience on our website. You can read more about our use of cookies, or just continue to use the site as you normally would if you agree.
MCSA: Windows Server 2016 (70-740) Online Training
The exam associated with this course has been retired. However, this course still retains value as a training resource.

In this intermediate Microsoft Server 2016 training, Garth Schulte covers the objectives in the 70-740 exam, which is one of three exams required to earn the MCSA: Windows Server 2016 certification.

MCSA: Server 2016 is broken into three exams that mirror the three stages of implementing Server 2016 in an enterprise environment. This 70-740 training teaches you how to install Server 2016 and do the initial configuration. It also covers the new features of Windows Server, like containers, Nano servers, and failover clustering.

After finishing this Server 2016 training, you'll know how to plan and install a Windows Server 2016 infrastructure, including how to set up AD, set group policies, and be able to use Hyper-V and containers. It’s all the stuff you’ll handle on a daily basis. For that reason, this is valuable training for anyone who just started using Server 2016 — even if you’re not planning to get the certification.

With at least a year of experience, systems administrators who complete this 70-740 course will be well-positioned to step into higher-level administrator roles and be on a path to systems engineer.

This MCSA: Windows Server 2016 training maps to the Microsoft 70-740 exams objectives, and covers topics including:

New or aspiring systems administrators. If you’re a new sysadmin and your company has just thrown you into Server 2016, this is a good place to start. This 70-740 training will give you a good overview of what you need to support Windows Server. You will learn more about how servers function, and you’ll be ready for the first of the three exams needed for the MCSA: Server 2016 certification.

Experienced systems administrators. Sometimes it’s good to just go back to the basics. Even if you’re not going for the MCSA: Server 2016 certification, taking this training for the 70-740 exam will refresh your knowledge of server roles, virtual machines, Active Directory, and introduce you to all the new features in Server 2016. Then, if you do want to go on and get the certification, you’ll be prepared for the first exam. 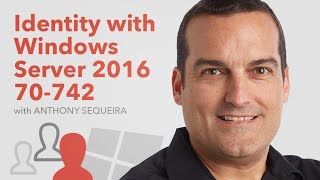 In this video, Anthony Sequeira covers the introductory video to his video series on preparing for the 70-742 exam for Microsoft's Identity with Windows Server 2016 certification. If you're considering the certification, or just need familiarity with identity management in Server 2016, prepare with Anthony.