During their move to role-based exams in 2019, Microsoft left the MCSA: Server 2012 and 2016 exams untouched and rolled advanced Server 2016 topics into MCSE: Core Infrastructure. Even in Microsoft’s restructuring around Azure, Windows Server is still running on millions of machines. Server 2016 and Server 2019 products are popular, but Server 2012 is still running strong. Considering Server 2003 and even 2000 are still widely used, it’s a good chance you’ll run into many Server versions at some point in your career. 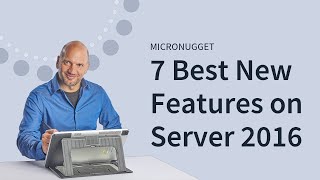 In this video, Garth Schulte covers all the new features that Windows Server 2016 boasted compared to its predecessor, as well as to its competition. Learn about the much-anticipated features while also preparing to use the hands-on labs that are available to CBT Nuggets students.