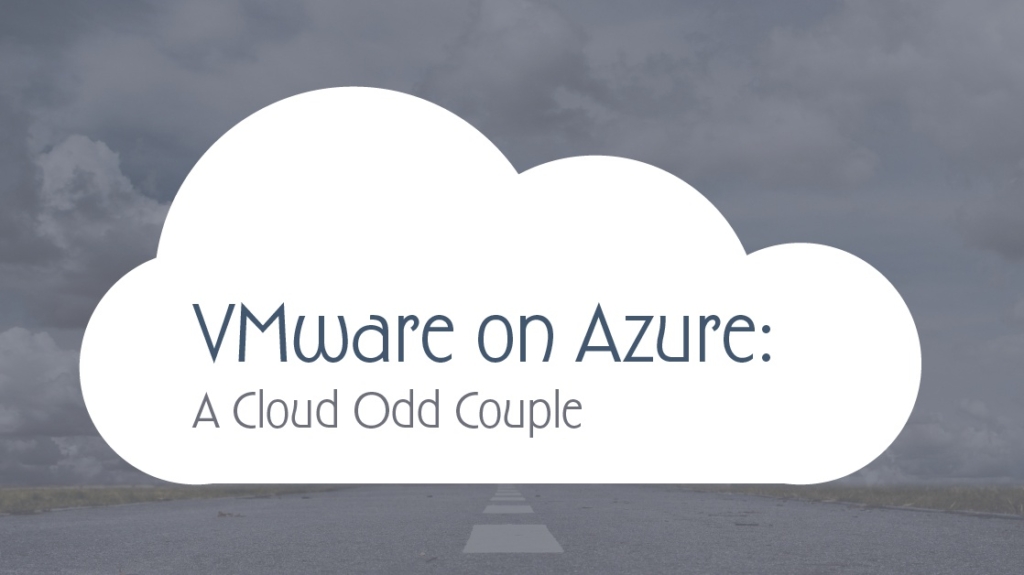 Microsoft Azure and Amazon AWS. Both are capable platforms offering robust services to businesses for all their cloud hosting needs. Both are huge businesses, constantly vying to top the other in market share. And both are continually rolling out new features and services, sometimes in direct response to the other, taking away a competitive advantage.

When Microsoft recently announced new services to help run your VMware infrastructure on Azure it was par for the course, an answer to AWS's similar service.  Eyebrows raised however for this one, a VMware and Microsoft collaboration?  That's like Ford and Chevy building a truck together, or a Marvel/DC crossover. So, what's the Big M's real game here?

At the center of Microsoft's announcement is Azure Migrate, a tool that you run in your vSphere environment. It analyzes your VMs and returns recommendations for migrating them into Azure. Most VMs will need a lift-and-shift, basically, the VM is replicated byte-by-byte into the cloud and reborn as an Azure VM. For database servers, Azure Migrate will suggest bringing the database into Azure's serverless database service, which is way cheaper than running the entire VM.

With both services, Azure Migrate will suggest appropriate sizing of cloud resources to help you optimize your costs. In case you missed that, yes, Microsoft is telling you how to give it less money.

The end result? No more capital expenditures on servers and storage and no more expensive VMware licensing — you pay for the compute and storage you need and take advantage of all the scalability and availability of Azure.

For Microsoft, this is a clear win. Along with the licensing costs, you're already paying them, now they are your data center, also getting all your infrastructure budget that previously went to the hardware OEMs. For the admin, it's also a win, because you are a budget-cutting hero.

But Azure Migrate is not the end of Microsoft's exciting news.

We've previously explored VMware on AWS here on the blog and its great potential for hybrid deployments and cloud migrations while maintaining the power and flexibility of vSphere.

Now Microsoft's firing back with its own hosted VMware solution. They announced "the preview of VMware virtualization on Azure, a bare-metal solution that runs the full VMware stack on Azure hardware."

This seems absolutely bizarre; Microsoft running their direct competitor's software on their own cloud. If you dig a little deeper, though, the truth emerges. This isn't a replacement for on-prem vSphere or Azure-hosted VMs, it's just a stop gap to get your servers up into Azure while you figure out your long-term cloud strategy. Maybe you have a hard deadline, a VMware renewal or compliance issue; just sign up for the service, set up vSphere, and vMotion them on up.

The end result?  VMware might get paid temporarily, but Azure makes the bucks for the long run and leaves VMware in the dust. It's actually a brilliant strategy to win over customers who feel entrenched with VMware in their data centers and want to try something different.

This continues to demonstrate the huge paradigm shift Microsoft is undertaking. The company has traditionally made their money in licensing for on-prem software, be it OSes, Office, or LOB apps. They see the writing on the wall and are going all in with their cloud services.

But then things started getting weird.

There's a fight going on for the future of the data center. Mere days after Microsoft's announcement, VMware made one of their own, and they weren't happy. They started with a good slam, saying, "Microsoft recognizing the leadership position of VMware … as a superior and necessary solution for customers over Hyper-V or native Azure Stack environments is understandable."  Epic burn.

They continued with blatantly stating VMware running on Azure is not supported or certified, and in the VMware world, this is huge. Their hardware requirements can be very specific. If you don't follow them and have problems, no matter how much everything might be on fire, you are on your own.

Stopgap needs we can maybe understand, but putting anything production in an unsupported infrastructure?  Microsoft claims "are delivering this offering in partnership with premier VMware-certified partners." But without naming these partners, how much trust can they really garner?

With the bare metal stack currently in preview and Azure Migrate in GA now, it should be interesting to see how this plays out, both for Microsoft and VMware. If you are a VMware admin be prepared to closely weigh pros and cons to cloud hosting on any platform. And with so much to learn about VMware make sure you check our vSphere 6.5 course here on CBT Nuggets.