CBT Nuggets uses cookies to give you the best experience on our website. You can read more about our use of cookies, or just continue to use the site as you normally would if you agree.
MCSA: SQL Server 2012 Online Training
The exams associated with this course have been retired. However, this course still retains value as a training resource.

The 70-461, 70-462 and 70-463 exams associated with this playlist were revised in 2016, but a large percentage of this course still maps to the current exam objectives and continues to provide value as a training resource.

Though Microsoft has made it relatively easy to migrate data between SQL Server versions, many companies rely on older SQL Server versions for a number of reasons. In addition to exam preparation, this training can serve as reference material for anyone who currently manages databases or data warehouses that still live on SQL Server 2012.

For anyone who manages IT training for a company or team that still supports SQL Server 2012, this SQL Server 2012 training can be used for legacy technology training, on-boarding new systems administrators, or as part of a team training plan.

This MCSA: SQL Server 2012 course is valuable for new IT professionals with at least a year of experience with SQL Server 2012 and experienced systems administrators looking to validate their Microsoft skills.

New or aspiring systems administrators. Mainstream support of SQL Server 2012 may have ended in 2017, but there are plenty of data warehouses still being run by this version. This MCSA training can help system administrators design, monitor, backup, and troubleshoot SQL Server 2012.

This Microsoft training course with Garth Schulte will teach you how to write queries using SQL Server 2012. Learn to create and alter tables with T-SQL, implement subqueries, manage transactions, and more, as you prepare for Microsoft's 70-461 exam, one of three exams that must be passed to receive your MCSA: SQL Server 2012/2014 certification.

This SQL Server video training with Garth Schulte covers Microsoft’s in-demand server including how to install SQL Server 2012, implement a backup strategy, and more. It also prepares learners for Microsoft's 70-462 exam. SQL Server database administrators are in extremely high demand all over the world. SQL Server 2012, with its high availability and cloud-ready features, is an industry leader, further increasing the demand for DBAs. If there ever was a time to get certified as a SQL Server professional, it's now! Note: The exam associated with this course was retired December 1, 2015. However, this course still retains value as a training resource. 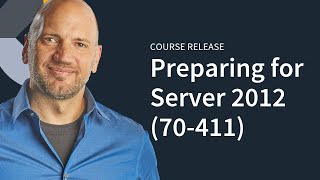